Washington (tca/dpa) – The Senate Finance Committee’s tax package would generate about 60 billion dollars less revenue to pay for the rest of Democrats’ multitrillion-dollar social safety net and climate bill, according to a preliminary Joint Committee on Taxation estimate. 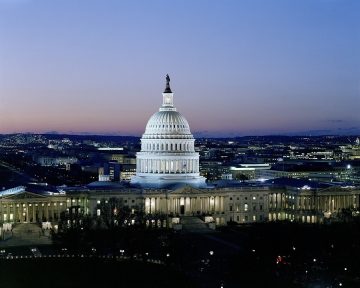 Among the changes Senate Democrats added were exemptions for employer pension plans and nonprofits from a new minimum tax intended for the largest corporations, and expansions of clean energy credits to benefit hydropower projects, hydrogen fuel production, energy-efficient home electrical upgrades and more.

The panel left out, for now, House-passed changes to state and local tax deductions that would generate nearly 15 billion dollars over a decade. Combined, the edits left the tax cuts and increases in the bill tallying 886 billion dollars in net revenue to offset other spending, shy of the House version’s 946 billion dollars.

With Sen. Joe Manchin III pushing spending lower than the House-passed 2.2 trillion dollar figure, that’s likely still more than enough to pay for the bill and even trim offsets further — if Democrats can agree on a version the West Virginia centrist will back.

The biggest new corporate tax in the bill, which would create a 15 per cent minimum levy on corporations based on income reported on financial statements, would generate 297.5 billion dollars over a decade in the Senate version, the JCT found.

That’s 21.3 billion dollars less than the House-passed version of the tax thanks to the defined benefit pension plans exemption that business groups lobbied for and new text that would avoid taxing large nonprofit organizations’ income.

Some of the biggest charities, health systems, universities and other nonprofits take in hundreds of millions of dollars, or even over 1 billion dollars, in net income annually. The new language from senators would only count income from a trade or business unrelated to a nonprofit’s mission when determining whether they qualify for the tax and how much they might pay, essentially preserving these organizations’ tax-exempt status.

Meanwhile, the Senate version would make some additions to clean energy incentives included in the House bill, a major component of the overall package and a priority of Senate Finance Chair Ron Wyden, who wrote a bill on which the provisions are partly based. The cost of the tax breaks climbed 13.1 billion dollars from the House version to almost 325 billion dollars, according to the JCT.

The cost of tax credits for renewable electricity generation and investment climbed by more than 3 billion dollars in part because of expansions for hydropower projects. The majority of U.S. hydropower generation comes from California and Pacific Northwest states, according to the Energy Information Administration, including Wyden’s home state of Oregon and Finance panel member Maria Cantwell‘s constituents in Washington state.

The Finance Committee version would expand production tax credits for hydroelectric power generation and add pressurized water distribution systems such as pipelines to the list of eligible power sources. It would also make “hydropower environmental improvement property” eligible for investment tax credits, including hydroelectric dams and projects intended to “add or improve safe and effective fish passage,” such as fish ladders that let migrating fish get around dams and other river obstructions.

The House-passed bill sweetened the breaks for projects built in areas where coal mines or coal-fired power plants shuttered. The Senate version would also offer the bonus credit for projects built in areas where at least 5 per cent of jobs are in the oil and gas sector or at a brownfield site, where hazardous substances or other pollutants could complicate construction. But it would strip the bonus if construction is in a forested area.

Separately, a 3 billion dollar boost went to incentives for producing hydrogen fuel, a clean power source that emits only water and can be made from various sources including natural gas or coal and counts Manchin as a key supporter. An addition in the Senate version would allow facilities turned into hydrogen production plants from 2022 on to qualify for the tax breaks for new sites.

And the price tag for a break for making homes more energy efficient would go up by 4.4 billion dollars under new language to allow a 30 per cent tax credit for residential energy efficiency projects to be used for upgrading or buying electrical panelboards and circuits that power appliances.

Dublin, Ireland-based Eaton “inverted,” or relocated its headquarters overseas, from Cleveland after acquiring Cooper Industries PLC, an Irish firm, in 2012. It still has substantial domestic operations, however, and maintains its U.S. headquarters in Cleveland.

Senate Democrats would also sweeten a new tax credit for advanced manufacturing by about $1 billion over the House version. Broadly speaking, credits for firms that manufacture wind or solar power-related components wouldn’t begin to phase out until after 2028, two years later than the House version.

And there are credit set-asides for makers of solar components like tracker systems, which orient panels toward the sun, and inverters, which convert direct electricity into power that can be used by the electrical grid.

Chief backers of the separate solar component credits include Georgia Democrats Raphael Warnock and Jon Ossoff, who each won narrow runoffs in January. Warnock, who won a special election for a partial term, is considered among his party’s most vulnerable incumbents in next year’s midterms. Dalton, Ga., is host to the biggest solar manufacturing plant in the Western Hemisphere, according to Ossoff’s office.

Other changes are likely to emerge in the bargaining over the next iteration of the expansive budget bill if Democrats hope to win Manchin’s approval. For example, they may have to trim bonus electric vehicle credits that would benefit carmakers that employ unionized labor, a boon for Detroit-based General Motors Co. but not for firms like Tokyo-based Toyota Motor Corp. that want to expand their EV-related manufacturing in states such as West Virginia.

It’s still unclear what will happen with the House’s “SALT” cap changes, which would net revenue over 10 years but offer a big benefit to wealthier households during the next several years.

Since the current 10,000 dollar cap would otherwise expire after 2025, the House’s move to lift it to 80,000 dollars and then extend that higher limit would end up bringing in 15 billion dollars more than existing law over a decade. But Menendez is still battling with Bernie Sanders, I-Vt., and other critics over the scope of any SALT break.

Excluding the uncertain SALT cap changes, Senate Democrats are working with 32 billion dollars less in tax increases than in the House-passed bill, but Manchin’s 1.75 trillion dollar spending limit would mean they’d still have more than enough offsets to make the bill fully paid-for.

Aside from the corporate minimum tax exemptions, Senate changes that would lose revenue include the Finance panel’s moves to drop an 8.6 billion dollar tax on nicotine and vaping products and a 55 million dollar rule change blocking private prison companies from real estate investment trust status.

A tweak to a provision limiting what multinational companies can deduct in interest expenses would give more flexibility in how businesses can calculate that limit, losing about 4.4 billion dollars in revenue. Partly offsetting that are other moves targeted at multinationals, including a 1.8 billion dollar tax increase aimed at making it harder for companies to do what Eaton and others did in previous years — relocate their headquarters overseas to trim their U.S. tax bills.