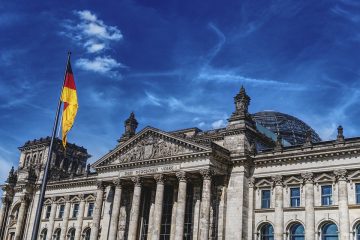 Berlin (dpa) – For conservatives who have been in government in Germany for 16 years, it’s a possibility almost too outrageous to contemplate: if current polls are accurate, and the centre-right parties don’t gain ground before election day, Germany could swing dramatically to the left.

Germany could, critics warn, have a coalition of the centre-left Social Democrats (SPD), the Green party, and the hard-left Die Linke.

Or could it? Putting the political fear-mongering that one might expect during a campaign to the side, dpa examines several concrete reasons why a left-wing alliance – referred to as red-green-red, or R2G, after the parties’ trademark colours – may, or may not, happen.

1. RED-GREEN-RED IS UNPOPULAR IN POLLS

According to a poll by public broadcaster ZDF last week, this combination is the most unpopular of the possible coalitions after the federal elections on 26 September. Fifty-six per cent of those surveyed would view it negatively, and only 28 per cent positively.

Die Linke is struggling to maintain support among the public, even in its eastern heartlands, and would make a weak coalition partner with little leverage. The party could slide from the 9.2 per cent that it achieved in the last elections to around 6 per cent, if the polls are to be believed. «With the exception of Thuringia, Die Linke has bled quite a bit of support in the East,» says political scientist Andre Brodocz. There has been strong competition from the far-right Alternative for Germany (AfD) in the east, Brodocz says, despite the political differences between the two parties.

Right-wing warnings about the security risks of bringing the hard-left into government are outdated, but do «shine a spotlight on Die Linke to some extent,» Brodocz says. This includes a focus on its policies such as supporting the dissolution of NATO and desiring a ban on arms exports. Die Linke have so far stuck to their manifesto, despite some small signs they could be prepared to negotiate.

4. RED-GREEN-RED HAS EXISTED AT THE STATE LEVEL FOR YEARS

The state premier in the former eastern state of Thuringia is from Die Linke, at the head of a red-green-red coalition since 2014. In Berlin, the SPD mayor also leads an R2G coalition. An earlier precursor was a SPD and Greens government in Saxony-Anhalt in 1994, which received limited support from the PDS, an East German party that later joined Die Linke.

5. THERE ARE EXTRA HURDLES AT THE FEDERAL LEVEL

At the federal level, it is Die Linke’s defence and foreign policy that is the major sticking point. SPD chancellor candidate Olaf Scholz has said he would demand a clear commitment to NATO from any coalition partner. Die Linke’s leader in parliament, Dietmar Bartsch, has described Scholz’ demand as «recognition nonsense» that should not stand in the way of joint governance.

Despite much common ground on domestic policy, which Die Linke has been keen to emphasize in recent weeks during the campaign – and strong indications from Die Linke leaders that they want to be in government – Brodocz is sceptical: «Ultimately, Die Linke has to decide whether it wants to swallow this very large olive-coloured ‘NATO toad’.»

He sees a three-way coalition between the SPD the Greens and the liberal Free Democrats (FDP) as more likely, despite the disparaging remarks about the idea from FDP boss Christian Lindner.