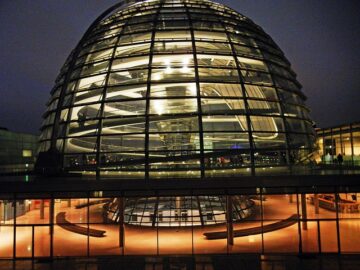 Berlin (dpa) – As the leader of the conservative Christian Democrat (CDU) party since January – Germany’s biggest party – Armin Laschet has the strongest claim to be the conservative bloc’s candidate for chancellor.

As premier of North Rhine Westphalia, Germany’s most populous state and its industrial heartland, his candidacy for the country’s top job in the September elections looks excellent on paper.

The son of a miner and a lawyer by training, Laschet has already indicated he plans to continue Chancellor Angela Merkel’s legacy and tread a path firmly in the political centre.

It is little wonder that the CDU party leadership gave him their overwhelming support in an informal meeting on Monday.

But the 60-year-old Laschet has a popularity problem among the electorate.

Polls indicate he would even lose against potential rivals from less popular opposition parties if Germany elected its chancellor directly.

Indeed, the CDU and their Bavarian-based Christian Social Union (CSU) have suffered a sharp slump in opinion polls amid frustration over the extended coronavirus lockdown and a series of political scandals.

As a result, the pressure is on the conservatives to choose a flagbearer who will stem the loss of seats it is facing in the national parliament, the Bundestag.

A practising Catholic, Laschet – a father of three – initially wanted to be a journalist, then moved into publishing before switching to politics. He is also a fluent French speaker.

A former member of both the German and European parliaments, Laschet also held several ministerial portfolios in North Rhine Westphalia before leading the CDU to victory in the state in the 2017 election.

A strong European, he is seen in the CDU as more inclined to building a consensus than confrontation.

But he has not shied from political controversy, for example vocally backing Merkel’s decision to allow around 1 million stranded migrants into the country during Europe’s refugee crisis in 2015.

More recently, the cigarillo-smoking politician has come under fire for his handling of the coronavirus crisis – an area where his main rival for the chancellorship, Markus Soeder, has received praise.

Laschet at times has appeared to struggle to portray a steady hand during the crisis due to a number of serious outbreaks in his home state and changes to his position as to how to deal with the pandemic.

His uneven handling of the coronavirus crisis has been a key factor in driving down his opinion poll numbers.

In past weeks, he has peppered his social media accounts with news about measures he has taken during the pandemic, and led calls for a “bridge lockdown” to stem the rise in infection numbers until vaccines have been more widely rolled out.