If Afghanistan’s armed forces are to have any chance against the Taliban, they need a strong air force. But the US withdrawal, on top of missed training opportunities due to the coronavirus pandemic, make it unclear whether Afghanistan will have a chance to get its winged warriors up to snuff. 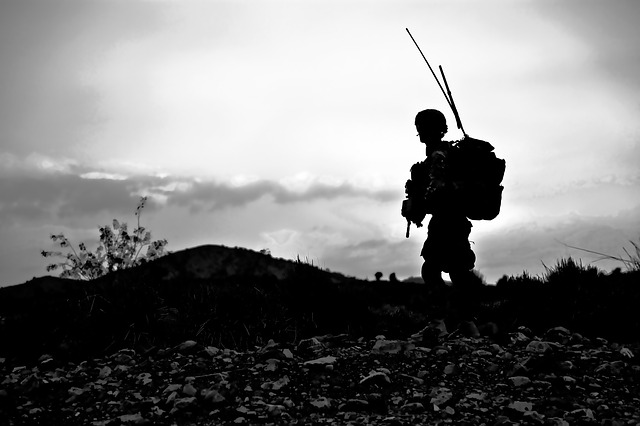 Shah Wali Kot, Afghanistan (tca/dpa) – The UH-60 Blackhawk plummeted like a roller coaster from 10,000 feet — safe from whatever the Taliban was firing at it — all the way down to 50 feet, its nose almost licking the sun-scorched terrain of the Shah Wali Kot.

Blitzing at 115 miles per hour (mph), the helicopter swooped just beyond the battle barriers of an Afghan army base, its two onboard gunners arcing their M240 machine guns as they scanned for any Taliban nearby.

When the Blackhawk landed, five soldiers — two wounded, all terrified — were dragging a sleeping bag with their belongings down the hill through the desert underbrush. They were almost at the helicopter when the gunners let loose a burst of bullets toward a dull-brown knoll. The soldiers threw themselves onboard, one of them frantically pointing at an unseen enemy to the left and begging the crew to take off quickly.

The door closed. The pilot punched the throttle. The Blackhawk lunged forward, then knifed up into the afternoon sky to the drum roll of another M240 salvo.

Before takeoff hours earlier, Captain Rezaye Jamshid, had explained — a wan smile through his thick beard — that he would descend fast “because of the situation.”

“But don’t worry,” he said, soothingly.

Bravado? Not really. More a curt acknowledgment of what had become the lethal, daily reality confronting Jamshid and the rest of the Afghan pilots. The Taliban troops were resurgent. The Americans along with NATO troops and their airplanes — the F-18s, Reaper drones, C-130s and hundreds of other aircraft — were leaving. The Afghan air force, which the US and its partners has nurtured to the tune of 8.5 billion dollars since 2010, would now be the government’s spearhead in its fight against the enemy.

But the American pullout was revealing that the very viability of that air force was in question. And it was all getting worse.

Since May 1, the original deadline for the US withdrawal, the Taliban military has overpowered government troops to take at least 23 districts to date, according to local media. That advance has further denied Afghan security forces the use of roads, meaning all logistical support to the thousands of army and police outposts and checkpoints — including resupplies of ammunition and food, medical evacuations or personnel rotation — must be done by air. The result is an operational tempo the pilots can’t sustain; their aircraft routinely exceeds the maximum number of hours they’re allowed to fly.

And the war means there’s plenty to fly for an air force that includes the single-propeller A-29 Super Tucano, a weaponized Cessna plane and a mix of American and Russian helicopters. The Kandahar airbase alone runs at least 50 to 70 missions a day, said General Fazal Karim Faqeer, head of base operations.

“The Taliban are waiting for you. They’re shooting different kinds of guns, RPGs [rocket-propelled grenades], rockets … everything is ready for you,” said Captain Mohammad Akbar, the pilot on one of two Blackhawks on a second mission that day.

It began uneventfully. The Blackhawks dropped by a nearby base to pick up bags of onions, tomatoes, flour, cooking oil, cartons of eggs (“Homeland’s product, homeland’s pride,” was printed on the side). The freight also included a surprisingly serene sheep and a few soldiers they would deliver to army outposts. Swinging toward the north-west, the Blackhawks were joined by a pair of MD530s, bumblebee-esque light-attack helicopters that would secure the perimeter.

Fields, trails and irrigation channels flashed below in the desert. The blue Arghandab reservoir glinted in the afternoon sun.

Then came the plunging descent, a dust-swirled rush to the ground and the panicked chucking of supplies out of the side door before that switchblade-fast takeoff. Though it was all done in under a minute, there was still enough time for a Taliban sniper to put a round in a soldier’s leg; the crew had to drag him into the helicopter.

“The only reason we’re alive is because the UH-60 is so fast,” Akbar said later, after the helicopters had landed back at the Kandahar base, which the Americans refer to as KAF. Yet they hadn’t been fast enough to escape taking hits; a bullet had punched a hole through the horizontal stabilator of one of the Blackhawks, and shrapnel pitted the fuselage of another.

Both of them were out of commission until they could be repaired.

That would take some time. The American withdrawal means US troops “have gone to zero,” and so have the contractors who maintain the Blackhawks. The dwindling number of UH-60 maintenance contractors, who have pulled back entirely from Kandahar, means the helicopters have to fly to Kabul for repairs and upkeep.

But there is a deeper problem: During the last two decades, the US has built an army in its own image, with Afghan security forces relying on some 18,000 contractors for everything from buying fuel and bullets to doing payroll to the critical tasks of maintaining the 162 aircraft used by the AAF and training the pilots who fly them.

Since late 2019, 94 per cent of US forces involved in training and advising the air force have left, so contractors have taken on almost all roles. Without continued contractor support, according to a Defense Department inspector general’s report earlier this year, those warplanes would be combat effective for only a few months.

“We don’t know when the contractors are going to leave here. When they do, it’ll be very bad,” said Colonel Salim Razmendah, who runs UH-60 operations in north and east Afghanistan out of Kabul airbase.

Officials with the Afghans National Security Council insist they can “Afghanize” the army, meaning Afghans can take on more logistics roles or at least renegotiate terms with contracting companies for significant savings. But the air force is different — maintenance contracts account for more than half of its budget.

Training a routine-level aircraft maintainer takes 18 months; an advanced-level one more than seven years. Though Afghans were dispatched to Slovakia for nine months to learn how to maintain the UH-60, the coronavirus pandemic meant contractors gave no hands-on training when the students returned to Afghanistan.

There have been frenetic efforts to change that. A few days after that early May mission, the two Blackhawks were in Kabul, one of them swarmed by a gaggle of uniformed Afghans working with a contractor in di rigueur khakis.

Razmendah, who was standing nearby with his helmet under his arm, said: “The Afghan maintainers, they’re working hard. But it’s very hard for them to do in two months what takes two years.”

One potential solution, officials say, is to transfer contract maintainers to a nearby country such as Uzbekistan and bolster nearby bases in Afghanistan like the one in Mazar-i-Sharif, 20 minutes away. No neighboring government has accepted. Another contractor with a braided beard added there were plans to run trainings with Zoom or virtual reality, but everyone acknowledges there’s no substitute for on-site training. Meanwhile, of the 47 Blackhawks with the AAF, 10 were due for inspections.

None of this comes as a surprise. That the Blackhawk was even part of the Afghan air force’s assets was more a political than a practical decision, even though US commanders once touted it as the silver bullet against the Taliban. Fast and survivable, the Blackhawk was preferred by crews over the Russian-made Mi-17, once the backbone of the Afghans’ rotary wing.

But US sanctions on Russia meant a moratorium on importing Mi-17 parts. The goal was to phase them out with refurbished UH-60s as part of a decadelong transformation plan ending in 2023, said General John Michel, a retired US Air Force general who oversaw the NATO mission to build a modern Afghan air force and is now an executive in the aviation industry.

“We introduced a complex system late in the game, and now we’re ending it three years early,” he said. “So you have a system not as well-suited for the mission set.”

The Mi-17, he added, was an aircraft the mechanics knew since the Soviet era and could handle more than 80 per cent of its maintenance. (They have zero maintenance capability so far on the UH-60, the inspector general report noted.) Besides, the Mi-17 was better for battles, Michel said.

“It’s tractor with a rotor, a U-haul truck, and it has a lot of inherent agility. You could drop that thing on the pavement,” Michel said.

Michel expected the Pentagon to keep the Mi-17s in operation for longer and reduce the number of aircraft to a more manageable number.

But it’s unclear what reductions can happen with an already overstretched air force. At KAF, General Faqeer, a burly, clean-shaven Afghan flyboy with the strut to match, spoke glowingly of his A-29, a single propeller warplane equipped to drop guided bombs and the pilots under his command. (He rhapsodized his time training in the US, professing his love for guacamole.)

“When you bring a soldier back for medical treatment, you’re like an angel,” he said.

But he acknowledged that the 10-minute response time troops seeking air support could expect when NATO was around was long gone.

“We have what we have right now. With NATO allies, they would just shift the plane from one spot to another. For us, we have to receive a cypher … it goes to the Operations Informations Center, and then the pilot has to fly,” he said.

Ground commanders complain that can take an hour and a half, if strike aircraft come at all. The response time is also likely to get worse. Pilot training is afflicted by problems, including attrition.

Five UH-60 pilots left in the last three months due to Taliban threats, officers say; in January, a pilot was killed in a drive-by shooting. Though there are 150 cadets in the pipeline, Razmendah said, he and other active-duty pilots were too overstretched to prepare them for missions.

Jack McCain, a former adviser to the Afghan air force who helped train UH-60, said the pace was “not sustainable.”

“You’re going to burn your people and your aircraft out if you don’t prep their replacements and get them out of the fight,” he said, adding that flying in Afghanistan was akin to “flying in Vietnam every single day and with nowhere else to go.”

Despite those issues, few dispute that the AAF gives the government a crucial edge over the Taliban — or that it’s a relative success story in an overall spotty US record.

“The Afghans did something the US would never ask of their own pilots: from never touching a Blackhawk to flying operational missions in under a year, which is flabbergasting,” McCain said.

The AAF, Michel said, was “the single most important capability that we have done in our investment of people and resources.”

But the air force is under constant threat. On Wednesday, an antitank missile slammed into the side of a Blackhawk near the airport in Ghazni, a stop that pilots had been forced to make every day to replenish fast-depleting ammunition stores. The pilots survived. The Blackhawk couldn’t be repaired; 46 remain.